The Writers Digest Conference had a booksellers table. I got several books on the craft including Steven James’ very useful text, Troubleshooting Your Novel and his other book Story Trumps Structure. I also purchased Windy Lynn Harris’ book Writing & Selling Short Stories & Personal Essays. I bought both of these books the first day I was there.

On the second day I hadn’t planned to buy any books, so I just let my eyes fall on the titles. Nothing I wanted, so I chatted with one of the ladies that stood behind the counter about the bookstore she works in. I was about to leave when my eyes fell on a book that if I had been looking for it I would have never found it. A book I didn’t know existed, a book I needed. 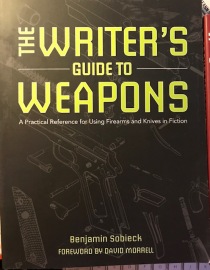 The Writer’s Guide to Weapons

Now you might be thinking why on earth would anyone need this book. All this information is online. Well…maybe, but it isn’t in one place.

This book deals with various (and the most popular) firearms (and ammo) used in literature. It also has a section on knives. It is a practical reference guide.

It discusses firearms that were manufactured in the 20th century or later. So Historical Fiction guys, I’m sorry, this one will not be of use.

I haven’t sat down and really combed through this book yet, but the ten minutes I did have with it, I couldn’t believe how much I didn’t know. My gun scene was so inaccurate.

This book even discusses recoil, hand size and the like.

I’m sure some people would say, “Well I know all I need to know about the gun I’m using in my story.” To them I say, “Fantastic…wish I did.”

But now I will be able to look it up and be accurate. And my small 18-year-old female character will not shoot a Desert Eagle at 100 feet.

www.lizkelso.com
View all posts by Liz Kelso →
This entry was posted in Books, Writing and tagged Books, Reference Books, Writing. Bookmark the permalink.

1 Response to The Writers Guides to !!!!

Blurring the lines between poetry and prose

Live to Write - Write to Live

We live to write and write to live ... professional writers talk about the craft and business of writing

Reading and Rereading the works of Anne Rice

Words and Pictures from the Middle East & Balkans

My journey as a writer.

Eight writers in four states and on three continents talking about what it takes to make a great story.

Notes from an urban jungle émigré

I have people to kill, lives to ruin, plagues to bring, and worlds to destroy. I am not the Angel of Death. I'm a fiction writer.

A Serial Novel by Kecia Sparlin